Your guide, Rick Roman, has been living on the Bruce Peninsula for 30 years. When he was 27, he and his wife Wendy purchased 50 acres of land and hand crafted their log house from the forest around them. Rick's quest for adventure began with his move to the Bruce Peninsula, and has really never let up!

Rick is passionate about the natural world and particularly the Bruce Peninsula. This passion has lead him down paths as a natural builder, environmentalist, outdoor enthusiast, and now EcoAdventures Guide. He has been building and teaching natural low impact construction for 3 decades. Rick has been active in the peninsula's environment group (BPEG) for many years, as a board member, as chair, and as part of the media committee. He sat on the Community White Cedar Working Committee, to establish better forestry practices for the Bruce Peninsula. He has worked with the Biosphere Association for the the last few years, developing and maintaining their website, and supporting their initiatives. He also built this website. Rick loves to hike (bushwack), mountain bike, back country ski, snowshoe, kayak and white water canoe. Rick is a certified Master Naturalist through Lakehead University and has completed his Remote First Aid. He comes to EcoAdventures with a wealth of local knowledge and a desire to take others on paths less traveled. 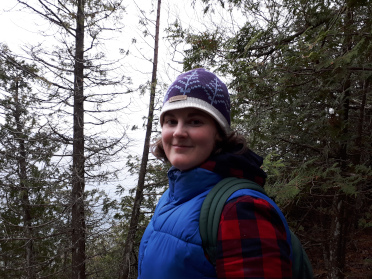 Your guide, Caeli Mazara started out as a historical guide in Toronto, winding through the narrow streets of the Distillery District, leading a parade of Segways. After spending her summers working on the Saugeen Bruce Peninsula for nearly a decade, she made a permanent move here in 2020. Now she takes adventurers year-round through woodlands, across cobble beaches, and along the dramatic cliffsides of Georgian Bay. After a year as an EcoAdventures guide, Caeli took on the role of operations manager in early 2021, now overseeing marketing and sales as well as getting out on adventures. She is an avid hiker and loves exploring the diverse trails of the Peninsula in all seasons. She is a gardener, a beekeeper, a writer, a camper, and an international cook. She is also a passionate environmentalist and loves knowing the adventures she leads help support conservation projects in the place she now calls home. Caeli has completed her Remote First Aid.

Your guide, Chris Bird, has lived on the Saugeen Bruce Peninsula since 2020 but fell in love with the Niagara Escarpment at a young age growing up in Burlington. Inspired and enchanted by the creeks, caves and forests of the Halton region, it was inevitable he'd become an avid hiker, snowshoer, canoeist and explorer in general. He aims to combine his love of the land with his passion for history to help others discover the immense beauty of this unique ecosystem. Chris has spent time living in British Columbia, immersing himself in the rich and diverse ecosystemic tapestry that the province offers. He also writes music and is an enthusiastic guitar player. Chris has completed his Remote First Aid.

Evan Helmond is the brand ambassador for EcoAdventures, and he has been living on the Peninsula for nine years. Evan produces some of the photo and video content for EcoAdventures, and helps on trips, but you’ll also see him at some farmers markets and other events promoting sustainable adventuring in the area. He has been going hiking and camping as long as he can remember and has been on many different types of adventures through the Outers program at his old high school. Evan likes to hike, backpack, kayak, canoe, bike, and climb whenever he gets a chance. Evan spends his time at home with his dog Angus, hanging out with his family, writing, working outside, shooting a few photos or some video, building, making, or fixing something.

guide, Graham Thomas, has been a resident of the Bruce Peninsula for over 20 years. A former chair of the Bruce Peninsula Environment Group and board member of the Escarpment Biosphere Conservancy, he has been committed to this area and ensuring its ecological integrity survives into future generations. He was instrumental in initiating the Dark Sky Preserve status of the peninsula and interpreting the importance of the night sky to residents and visitors alike.

Graham and his wife Christina have operated 3 businesses on the peninsula focusing on ecological tourism, organic agriculture, and local food and hospitality. Before choosing to make the Peninsula home, for 5 years he lived and worked in the remote wilds of British Colombia, the Yukon and The Northwest Territories. His outdoor pursuits include hiking, 4 season camping, whitewater canoeing, mountain biking, cross country skiing, trail running, mushroom hunting, bouldering, swimming, and amateur astronomy. Graham is a certified Master Naturalist through Lakehead University and has completed his Advanced Wilderness First Aid. 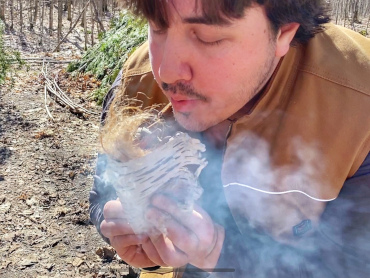 Jason W. Johnston is an Anishinaabe guide from Chippewas of Nawash Unceded First Nation. He has spent the past 15 years guiding cultural and adventure tours across Canada, from the mixed forests and Canadian shield of Ontario, to the northern wetlands of Alberta, and through the mountains and the Pacific Ocean of British Columbia. He has 3 diplomas and 2 degrees in tourism and natural resource science. Jason has worked for Parks Canada, Indigenous ecoadventure companies, and is currently the Interpretive Program Coordinator for Cape Croker Park and the Ontario representative on the Board of Directors for the Indigenous Tourism Association of Canada. 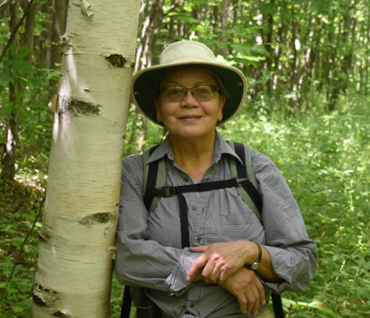 hig of the Wolf Clan is a traditional storyteller, poet and an award-wining author from the Chippewas of Nawash Unceded First Nation on the Saugeen (Bruce) Peninsula. She works as a naturalist, providing educational programs about the natural and cultural history of the Saugeen/Bruce Peninsula and the Great Lakes. Lenore’s first book of poetry, Running on the March Wind, was published in 2015 by Quattro Press. Before that, her work appeared in a number of anthologies. She has produced three children’s books: Bird Talk (1991) and Emma and the Tree (1996), and The Truth About Nibbles (2005) co-authored with her husband, David McLaren. She is the recipient of: Living the Dream Book Award (1993), and an Author’s Award (1988)